Warning:  I don’t normally write about baseball.  But you can’t deny that being at Justin Verlander’s One Hitter game is something special.

I have to admit that I went into this game not expecting much from the Detroit Tigers.  The Tigers should have been able to sweep the Twins and they didn’t.  Villarreal shouldn’t have had to come out of the bullpen at all on Thursday afternoon.  There are a lot of things that are simply making me angry about this Tigers team.  Let’s put it this way, the AAA people were passing out rally towels outside Comerica Park before the game and I told the woman passing them out to keep it because I didn’t think it would help.  She insisted that I take the rally towel anyway.

Anyway, my seat in Section 110 was absolutely lovely.  The people were very friendly for the most part and most people were paying attention to the game.  The person who stood out the most for me, though, was the little old woman sitting to the left of me.  She seemed to know absolutely nothing about anything, including baseball, and I’m still not quite sure why her son brought her to the game.   I think I want my season tickets for next year to be somewhere over in right field around this area.  It seems to be a good place to sit. 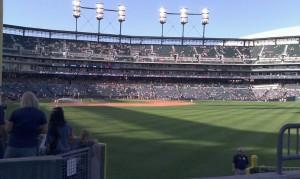 I have to say that I now know why people like Justin Verlander so much.  Up until now, I thought that people were just buying into the unnecessary hype of how great Verlander really is.  I thought that maybe Verlander was on his way out.  You have to admit, he’s been struggling a little bit this season, just like the rest of the team.  But tonight, for the first time in a while, Verlander brought his A-game.  Tonight Verlander threw a game the way that I would expect Verlander to throw given all the hype about how great he is.  I am very happy that I was at Comerica Park for this game.

I think I can pinpoint the time the excitement started as right around the sixth or seventh inning.  I think that everyone could tell by that point in the night that it was going to be a special game.  Well, everyone besides the old woman sitting next to me.  When Verlander gave up his one hit of the night in the ninth inning, the woman really had no idea what had happened.  Her son tried to explain to her that the no hitter had been botched, but finally just told her that he would have to explain it to her later.  It was actually slightly amusing how naïve she was throughout the entire game.

I must admit that after the eighth inning when Verlander was closing in on 100 pitches, I was actually considering the possibility that Leyland might bring in Benoit or Dotel or Coke for the ninth inning.  Given how Leyland has been managing the team this year, it truly wouldn’t have surprised me if he would have made a knuckle-head move like that.  But Verlander stayed in the game and although it didn’t end up being a no-hitter, the fact that he threw a complete game seemed to satisfy most people.

The only problem I see is that the Tigers are definitely not out of the woods yet.  They are still below .500, and at this point in the season, I would like to see them at least 4 or 5 games above .500.  In fact, I guess this wouldn’t even be bothering me as much if the Tigers would at least win more than 1 game in a row.  The fact that this team can’t win more than one game in a row and can’t seem to sweep anyone is very disappointing.

Tonight reminded me of some things that are wrong with this team.  Tonight was the night that I thought Fielder would break .300.  And he didn’t.  Tonight was the night that I thought Rayburn should have built on the energy of everyone else and made a hit.  And he didn’t.  Even Santiago made a hit.  Once Jackson is back, maybe it would make sense to remove Rayburn from the line-up and put in Kelly instead.  I actually like Don Kelly.  I can’t say it enough that I think he really is a talented player.  Kelly can and would do anything that he is asked to do.  That’s the type of talent the Tigers have in Don Kelly.  Of course, I’m not counting Don Kelly to be the Tiger’s savior, but I do think that he’s better than Rayburn.

And that’s all I have to say.  On the night I went into Comerica Park really not expecting that much, Justin Verlander blew my mind and threw a one hit game.  I won’t forget this night any time soon.  (And it was definitely a good night for the first fireworks of the season!) 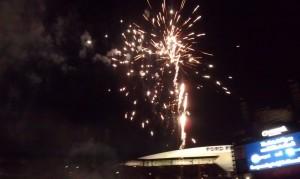