The other day in my statistics class, I talked about Control Charts.  I really wanted to drive home the point about the difference between individual runs charts and control charts.  So, I did a version of Deming’s Experiment with my students.

First of all, it was very difficult to get 1,000 marbles on very short notice, and even harder to get them in two specific colors.  I ended up going to the dollar store and buying the gemstones that people generally put in vases or in the garden.  The gemstones are sold in bags that are 14oz, but I can tell you now that there are about 100 per bag.  The hardest part for me was picking two colors of gemstones that I could actually tell the difference between since I am colorblind.

The execution in class was pretty seamless.  I had each group take five samples and record their results from each of the five samples in tables on the board.  Then the students found the averages for the ‘total #’ and the ‘proportion red’. 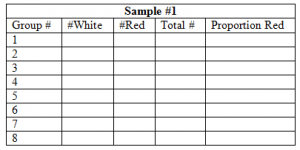 Together we constructed the individual run chart for all 40 of the values (8 groups with 5 samples per group) and we talked about how there was an obvious dip within each sample.  At this point, I had all of the groups turn their cups over.  Of course, it turned out that the dip was caused by the group with the ‘30’ on the bottom of their cup.  This allowed us to talk about the importance of making sure that your measuring tool is properly calibrated, etc.  And by the way, if you did not write the numbers on the bottom of the cups, it will still be crystal clear which group had the faulty cup.

After we did that, we constructed an x-bar chart for the average totals of each of the 5 samples.  We discussed how it is difficult to tell that the group with the ‘30’ was making a mistake when looking at the averages rather than the individual runs.  And finally, we constructed a p-chart for the proportion red.  I told the students to use 5 samples with n = 8 observations in each of the 5 samples.

This was definitely a worthwhile activity.  It allowed for reinforcement of individual runs charts, control charts, and an opportunity to talk about faulty measurement tools, which I would not have been able to easily incorporate into the discussion otherwise.