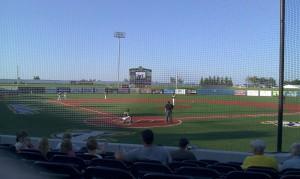 The first night at the park, I arrived about 1-hour early because I didn’t know how crowded the parking lot would be or how long I would have to wait at the Will Call window in order to pick up my tickets.  It turns out that it really wasn’t that crowded at all and 1-hour was more than enough time to find a parking spot, pick-up my tickets, walk around, get some food, and comfortably settle into my seat before the game began.  The parking is only $2 per car, but I found out later that you can park on the driveway outside the park for free if you want to save a couple of bucks.  This game wasn’t very exciting as the Beach Bums took a very early lead and never gave up the lead.

The second night at the park, I arrived about 5 minutes early.  The crowd was significantly smaller on Wednesday than it was on Tuesday (although I thought that Tuesday’s crowd was small).  I was able to get my food and get to my seat before the middle of the first inning.  This is the night that there was a very rowdy man in the crowd that was yelling things such as, “Open your good eye when you swing the bat!”  This was also the night that the Beach Bums lost 9-6 in 11 innings.  It was a very intense game, a lot more intense than what I was expecting from a Frontier League game.

The third night at the park, I arrived about 30 minutes early.  The crowd was significantly smaller on Thursday than it was on Wednesday (the crowd got smaller and smaller as the series went on).  This is the night that I decided to take pictures of the park.  It was probably the best night to take a picture since the crowd was the smallest that night.  This game was actually very exciting because the Beach Bums won after the home team had suffered such a disappointing loss the night before.  It was also the night that the Beach Bums debuted their new starting pitcher, Kurt Wunderlich. 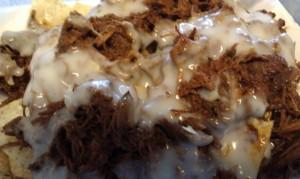 The food at Wuerfel Park was not the best, but it was reasonably priced. The pulled pork nachos were definitely a unique item and I would recommend them.  The popcorn was definitely stale and had a lot of kernels in the box.  The soft pretzel was not made of your typical pretzel dough, but seemed like rolled white bread that was actually kind of doughy tasting.  And there was not any cheese or toppings available for the pretzel except for the free mustard at the condiment bar.  The chicken fingers were not the best because the chicken fingers had a fishy smell to them and they were baked, which made the breading a little soggy.  The waffle fries were baked as well, but those were overdone and somewhat burnt.  I did not have the hot dogs or the burgers, but they do have a grill area along the third baseline if you want one.

Above all, my least favorite part of the entire series was the walk-up music for the Beach Bum’s first baseman, Jeff Flagg.  Every time Jeff came up to bat, I had to hear ‘Call Me Maybe,’ which could possibly be the worst song that has ever been recorded.  There are other oddities to the park as well.  They have two annoying bears as mascots, Suntan and Sunburn.  The announcer announces the game like it is a college basketball game, not like a professional baseball game.  However, at least he announces the game, unlike the announcer at Fifth Third Park where the West Michigan Whitecaps play.

In addition, they have really strange games, prizes, and promotions between innings, such as “Meal or No Meal?”  However, if you want to be chosen to play the games, you should request a seat behind the third baseline since the people were exclusively chosen from that area.  It is also the most crowded part of the park since I think that’s where they place all of the season ticket holders.  And if you want to catch a foul ball, good luck.  Most of them get hit over the clubhouse.

So, would I recommend a trip to Wuerfel Park?  Definitely.  However, the one thing I think I want to try to do next time is sit in one of the VIP Tables rather than in the chairback seating area.